Should I Listen to Analysts’ Predictions?

Analysts don’t have a crystal ball or superpowers, but there is value in paying attention to their predictions.  It’s just a matter of knowing how to interpret what they’re saying.

By no means is investing easy.  Even the most passive buy-and-hold investors have to deal with economic downturns and epidemics of panicky sentiment.  It’s perfectly normal and reasonable to seek guidance and direction – a helping hand in the seemingly unpredictable and sometimes turbulent equities markets.

But whom can we trust in a sea of opinions and predictions?  For every financial opinion out there, it seems like there’s an equally emphatic opinion that contradicts it.  Both sides of the issue will have their facts, their statistics, their charts.

It’s no small task to find expert opinions that hold weight and are backed by solid research.  If anyone might fit the bill, it would be analysts: those among us tasked with analyzing and interpreting the markets on a professional level.  Yet, one can only wonder whether analysts’ predictions are as accurate as we should expect them to be.

A Degree of Pedigree

At first blush, we might assume that an analyst’s prediction holds weight because he or she is associated with a famous financial institution.  Examples of these institutions would be Goldman Sachs, Morgan Stanley, JP Morgan, Merrill Lynch, and Oppenheimer.

We might experience a sense of comfort in knowing that an analyst is backed by a well-known large financial institution.  After all, this would mean access to powerful research tools that could provide a predictive advantage for such an analyst.

However, association with a high-pedigree financial institution isn’t the be-all and end-all.  Each analyst should be evaluated on his or her own merits regardless of institutional affiliation.

The fact is, it takes effort to research the researchers.  It’s not typical for an analyst to just come out and reveal his or her performance record.  It will most certainly take some digging, perhaps with the aid of modern technological tools such as apps and websites, to determine who has a strong track record and who doesn’t.

When They Talk, the Market Listens

Another factor to consider is that analysts don’t just react to market moves; sometimes they move markets themselves.  For this reason alone, I would contend that analysts, particularly the more influential ones, are worth listening to.

Interestingly, it’s not unusual at all for a stock’s price to jump or plummet based simply on one person’s opinion.  This type of thing happens on a regular basis, especially when the individual expressing the opinion happens to be an influential analyst.  With many traders and investors paying attention to analysts’ opinions and predictions, we often see sentiment turn ugly or euphoric within a matter of minutes, simply because an analyst expressed a strong opinion on a company’s financial prospects.

Swimming Against the Tide

And, this is where it starts to really get interesting.  When a mega-cap company leaps or plummets because of one analyst’s opinion, the question then becomes:  How to react?  Does it make sense to jump ship when an influential analyst slams a company, or to jump on the bandwagon when an analyst expresses high praise?

There’s no definitive answer to this, as it is too complex and situation-dependent to properly address here.  Suffice it to say that it’s highly worthwhile to at least be aware of what high-profile analysts are saying at any given moment, as these individuals frequently have the power to push stock prices up or down.

The Joy of Earnings Season

And then there’s earnings season: the quarterly market tradition in which analysts express their yeas and nays on most of the world’s most popular companies.  During this time, analyst activity reaches a fever pitch and stock prices are liable to huge moves.

As for me, throughout earnings season I continue to pay attention to analyst predictions but make my own decisions in the end.  Even in the most hectic earnings seasons, I will generally stick to my plan and invest accordingly.

If you want to learn more, you might want to read Why it´s important to pay attention to earnings season.

Who Has the Final Word?  You Do

Analysts can be a useful resource in helping us make decisions concerning our financial positions.  But, the final word regarding your finances doesn’t come from any analyst – it comes from you, who must always remain the steward and the caretaker of your financial future.

KINFO tracks performance from over 2300 analysts, here is an example of an analyst with a great track record. 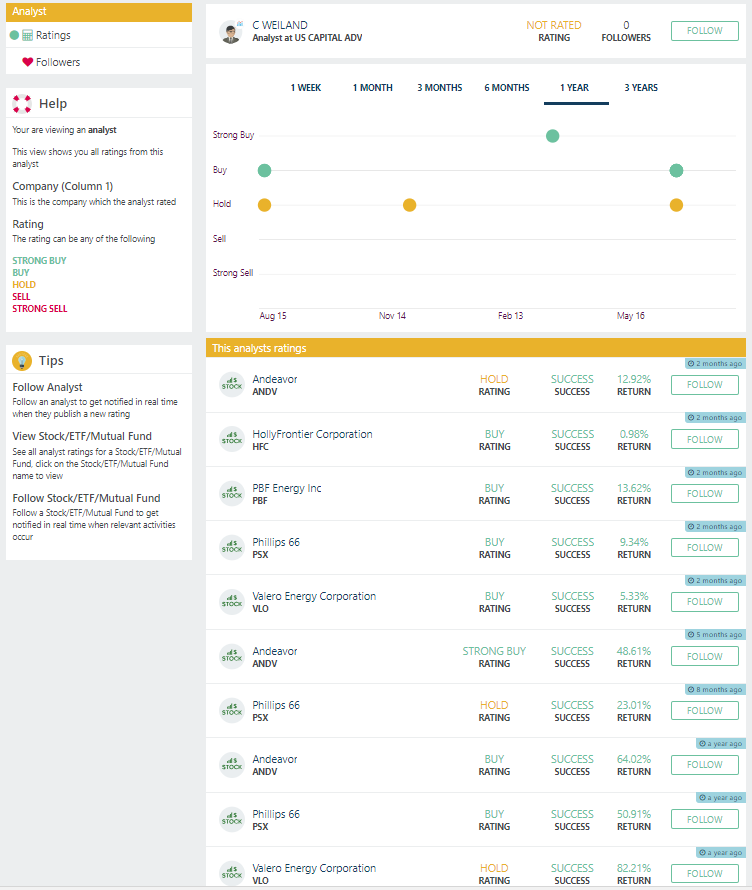 Kinfo is a social trading app that tracks your trading performance and lets you view other investors’ portfolios. Kinfo integrates directly with the most popular brokers in the US and calculates trading performance metrics based on transactions and holdings.

Trading involves significant risk of loss. It is not suitable for all investors and you should make sure you understand the risks involved, seeking independent advice if necessary.

Never risk more than you are willing to lose. Trading futures and other derivatives may cause losses that exceed deposits.

Hypothetical performance results have inherent limitations, some of which are described below. Kinfo makes no representation that any trading account will or is likely to achieve profits or losses like those shown. There are often sharp differences between hypothetical trading performance results and the actual results subsequently achieved by any trading program. Past results of advertised trading systems, profit statements, charts or any other representations are not indicative of future performance.

Kinfo is an educational site and is not a financial adviser or broker. All stocks, ETFs, commodities, Indices, Forex, Bonds, and other securities mentioned in our courses are for educational and illustrative purposes only. If you need professional investment advice, please consult a registered investment adviser. Futures and Options carry risk and may not be suitable for everyone.

Kinfo demonstrates specific advanced approaches (or methods). Any mention of Return of Investment percentages is only indicative of the potential of the strategy or the system and is not meant to signify any guaranteed returns.

Success in trading involves a range of human factors like decision making skills, adjustment skills, emotional control, and risk management and other psychological and behavioral parameters, all of which are completely in the hands of the individual. Trading involves significant risk of loss. It is not suitable for all investors.